An evening with author Ruth Ozeki

On Tuesday, January 21st I had the privilege of hearing Ruth Ozeki - author of the Booker shortlisted novel A Tale for the Time Being - speak at Stanford University.

On the relationship between reader and writer:

Ozeki says that all of her novels begin with a question that she needs to work out. When she is writing she exists in a world that does not include the reader, but she sees a work of fiction as being a collaboration between reader and writer. As she puts it, after she has done her bit - and if she has done it well - it is then picked up by the reader who brings their unique experiences completely to that fictional world.

"Without that the fictional world will not come alive. This is replicated every time that book is read, by each individual reader. Together we create this fictional world." 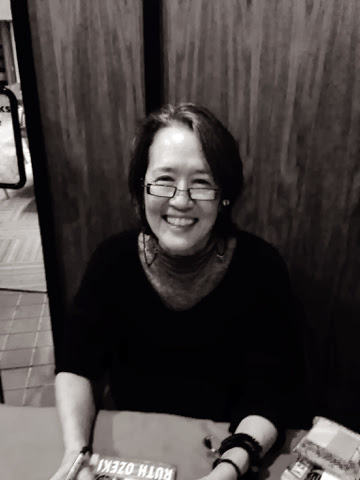 On writing and survival:

Suicide is central to A Tale for the Time Being, and Ozeki explains that in Japanese storytelling it functions almost as a trope. As a non-Christian nation, suicide is not viewed as a sin, and is sometimes seen instead as a redemptive act.

"For me writing is a form of survival, a trick I learned early on" and "every story is a story of survival as long as it is told. The telling is the survival." She says that in A Tale for the Time Being, "Nao is learning this as a young writer. As long as she continues to tell stories she will survive."

Writing is always "in retrospect" and Nao is trying to catch up to now. And she does ..." Ozeki does not elaborate, aware that many in the audience have not yet read the book but for those who have this makes sense.

On being a practicing Buddhist:

"It is very complicated practicing Zen in the west. Every time Buddhism moves to a different culture it changes. At every level there is tension there ... Anytime we start to idealise something ... then we are in trouble."

In Ozeki's words "In the west Zen is so Protestant". She compares these western attitudes to the Japanese phenomenon of Zen priests - along with employers and professors - bringing their acolytes out at night for the explicit purpose of getting drunk.

On being a Buddhist and being a writer:

Referencing Zadie Smith's essay, Fail Better, Ozeki says that in Zen meditation, as in writing, you have to try and fail again and again and again. "Zen meditation is a constant practice of failure." But she says that this is not a failure as you develop the faith that you can come back. And so too in writing, she says that it is not failure but is the very definition of the writing process.

Quoting a 13th century Zen master she says "Life is a continuous mistake" and for Ozeki this idea is liberating.

Ozeki completed the book just as Mad Cow disease blew up. She says everybody panicked, thinking that her book was too late, they had missed the moment but "little did we know the story was never going to go away". As an author she says she is very happy the book is still in print but "as a citizen of the world I wish the book was obsolete."

She describes My Year of Meats as a book about the engendering of ignorance and corporate media. And she says very frankly that she needed a product and happened to choose meat because it was "funny" whereas other choices, particularly tobacco, were not.

"When I'm writing a novel there is usually a seed of remorse." In the case of My Year of Meats that remorse derived from her 30s when she was making tv programs sponsored by unsavory corporations, including the meat and tobacco industries.

After writing My Year of Meats she felt she had given short shrift to the farmers who she describes as being caught between a rock and a hard place. And so she wrote All Over Creation, which is about genetically modified organisms.

On writing a novel as a 'thought experiment': 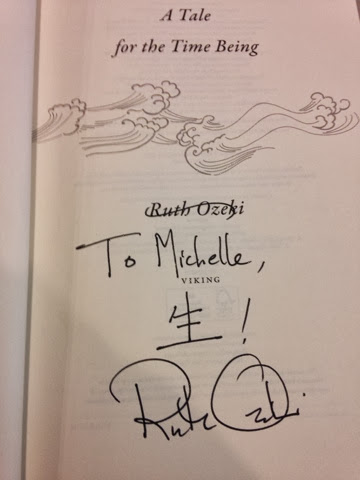 2/52 Jill Lepore, Book of Ages: The Life and Opinions of Jane Franklin

How to do justice to a book as enthralling, as steeped in research, as beautifully written as Jill Lepore's Book of Ages: The Life and Opinions of Jane Franklin.

One of the most striking aspects of this telling of history through the eyes of an 'ordinary' woman - who happened to be the younger sister of one of the 'Great Men' of history - is the serious treatment Lepore gives to the subject of child birth, breastfeeding and the care of children.

Lepore does not idealise motherhood, nor does she present it as mere drudgery. In Jane's letters she finds evidence of the joy that she took in mothering (while little if any evidence of that is found in her role of wife):

"Her nights were unquiet. Her husband reached for her. Her belly swelled, and emptied, and swelled again. Her breasts filled, and emptied, and filled again. Her children waked, first one, and then another, tumbling together, like a litter. She must have had very little sleep ... They grew like flowers. She pressed them to her heart. The days passed to months, the months to years, and, in her Book of Ages, she pressed her children between the pages."

And in a line that I can certainly identify with more than two centuries later, Lepore writes:

"She had no time, no quiet, no solitude. But she loved to read. 'My little wons are Interupting me Every miniut,' she wrote her brother'". (p. 96)

The final section of Book of Ages is an exploration of history itself, of how it is told and by whom:

"In the eighteenth century, history and fiction split. Benjamin Franklin's life entered the annals of history; lives like his sister's became the subject of fiction. Histories of great men, novels of little women." (p. 292)

In recreating the life of Jane Franklin - her primary source being the letters exchanged between Jane and Benjamin Franklin throughout their lives - Lepore's Book of Ages provides the reader with an historical record that reads like a novel.

This is no 'summer' read but it is well worth the effort. It is a book to savor.

2014: Reading more diversely (and 20 books by writers of colour)

Sunili Govinnage (follow her on twitter @sunili) has written eloquently here  about her commitment to only read books written by writers of colour in 2014. And while I am not making the same commitment, I would like my 2014 reading list to be significantly more diverse than it was in 2013 where I read only five books by non-white and/or non-western authors:

Junot Diaz, This Is How You Lose Her
Khaled Hosseini, And the Mountains Echoed
Jhumpa Lahiri, The Lowlands
NoViolet Bulawayo, We Need New Names
Paul Yoon, Once the Shore

In 2014 I already have these books sitting on my shelves (real and virtual):

Oscar Martinez, The Beast: Riding the Rails and Dodging Narcos on the Migrant Trail
Baratunde Thurston, How to Be Black
Jung Chang, Empress Dowager Cixi

As well as wishing to read more writers of colour, I aim to make progress on the giant pile of books by Australian authors I brought home on my last trip and will be checking out Anita Heiss's (follow her on twitter @AnitaHeiss) Black Book Challenge.

I spent the last minutes of 2013 in bed attempting to finish Samantha Shannon's The Bone Season before the clock struck midnight. I didn't succeed so this will be the first book on my 2014 #52books52weeks list (and one of the only science fiction books I have ever read), followed by Jill Lepore's brilliant Book of Ages: The Life and Opinions of Jane Franklin. These two books could not be more different, one set in the distant past, one in an imagined future, but both featuring interesting strong (white) female protagonists.

In January I am excited to report I will be attending talks by Ruth Ozeki and Amy Tan .. which means I need to do some fast reading. I look forward to sharing some of what these two writers have to say here in the coming weeks.

fence posts in your inbox